Background: Low birthweight (<2500 g) is often used as a population-level indicator of maternal-child health, as it is easy to measure and correlates with poorer infant health outcomes. However, it conflates preterm birth and intrauterine growth restriction, which have different causal pathways and require different approaches to prevention. Small for gestational age (SGA) (a proxy for growth restriction) and preterm birth may be more informative measures. We evaluated low birthweight as a population-level indicator.

Low birthweight (<2500 g) is used as a summary indicator of maternal and infant health for comparing populations or measuring trends over time.1 The 2500 g cut-off was initially used to identify preterm infants for a study published in 1918, when gestational age could rarely be reliably determined.2 However, low birthweight may be due to preterm birth, intrauterine growth restriction (IUGR), or both.

Although preterm birth and IUGR are both associated with poorer infant and childhood outcomes3,4, the causal pathways are different, and require different approaches to prevention.5 By conflating preterm birth and IUGR, the use of low birthweight as a population-level indicator may inadequately inform public health action, and opposing trends in the two conditions may be masked. This occurred in Canada between 1995 and 2004, when the proportion of low-birthweight live births remained stable while there was a simultaneous substantial increase in preterm birth and decrease in IUGR.6

The aim of this study was to evaluate low birthweight as a population-level indicator of infant and child health. Using population data from New South Wales (NSW), the most populous state in Australia, we identified groups defined by low birthweight, preterm birth and SGA. For each of these groups, we examined: 1) the overlap between the groups, 2) trends over the study period and 3) child health and educational outcomes. We also examined alternative combinations of indicators that might be more useful for making comparisons between populations, and for informing and monitoring population health interventions.

This was a population-based record-linkage cohort study of singleton live births in NSW with a gestational age of 24 weeks or more, between 1994 and 2006, with follow-up until 2014.

Birth information was obtained from the NSW Perinatal Data Collection, a population-based statutory data collection encompassing all live births and stillbirths of at least 20 weeks gestation or 400 g birthweight. Birth cohorts from 1994 to 2006 were included.

Hospital records for years 2001–2013 were obtained from the NSW Admitted Patient Data Collection, which includes records of all hospitalisations from all public and private hospitals in NSW. Hospital records include information about the length of stay, diagnoses and procedures related to the admission, coded using the International Statistical Classification of Diseases and Related Health Problems, Australian Modification (ICD-10-AM) and the Australian Classification of Health Interventions.

Information about deaths during infancy and childhood were obtained from the NSW Registry of Births, Deaths and Marriages death registration data, which includes all deaths registered in NSW. Data were available for deaths registered between January 1994 and March 2014.

Educational information was obtained from the National Assessment Program – Literacy and Numeracy (NAPLAN) annual assessment of students in Australian schools in grades 3, 5, 7 and 9.8 Children’s skills in numeracy, reading, writing and language conventions (spelling, grammar and punctuation) are assessed. For each test, scores are nationally equated across grades and years to ensure that results are comparable between grades and over time. Children are then categorised into one of six achievement bands based on their equated scores and nationally defined cut-off points for each grade. Data were available from 2009 to 2014 for students enrolled in government schools.

Birth, hospital, death and education data were probabilistically linked by the NSW Centre for Health Record Linkage, and anonymised data were provided to the researchers. False-positive and false-negative linkage results are each less than 5 in 1000.9 The methods used provide high, representative linkage rates for infants born alive after 24 weeks.10 Linkage rates for educational data are consistent across the gestational age range for children who live to school age.11

The study was approved by the NSW Population and Health Services Research Ethics Committee (#2012-12-430).

The number of hospitalisations from 7 days after the last day of the birth admission to 1 year and to 5 years of age were calculated for each infant. Admissions within 7 days of the birth admission were excluded to better capture infant and child morbidity, by removing admissions relating to the immediate effects of birth such as neonatal jaundice and feeding problems. The number of hospitalisations was categorised as 0, 1, and 2 or more.

The educational outcomes of interest were performance below the NAPLAN national minimum standard in reading or numeracy. Children who perform below the national minimum standard are those in the bottom band for their grade or who were exempt from sitting the test due to significant or complex disability.15 Reading and numeracy are the components of NAPLAN assessment that remain the most consistent over time. Where a child’s results were available from multiple years, the first available result was used. All children for whom at least one linked NAPLAN result was available were included.

Infants with severe congenital conditions were excluded from the calculation of all outcomes.

Records of live singleton births from 24 weeks gestation onwards were selected. Records with missing data for baby’s sex or birthweight were excluded (n = 1284, 0.1%). Records with implausible birthweights recorded were removed (n = 1479, 0.1%), based on the Tukey method, using a cut-off of 2.5 times the interquartile range.16 The overlap between groups defined by the primary indicators was assessed using a contingency table. The proportion of live births that were low birthweight, SGA or born preterm was plotted by year of birth to assess trends. The proportion of infants with each of the specified outcomes in each of the groups of interest was calculated. The denominator for each proportion was the number of infants in that group for whom data were available. This denominator was not the same for all outcomes, as the years for which data were available varied.

Table 1.     Number and percentage of infants classified by birthweight, size for age and gestational age at birth (N = 1 093 765)

Figure 1.     Trends in proportion of live births that are low birthweight, small for gestational age and preterm, NSW, 1994–2012 (click to enlarge)

SGA = small for gestational age (<10th percentile); NMS = national minimum standard
a Note that data on all outcomes was not available for all birth cohorts, so the number of infants included differs by outcome
b Admissions up to age 1 year, excluding admissions in the first 7 days of life
c Admissions from 1–5 years of age

Among infants with at least one linked educational record (n = 577 193), well-grown term infants had the lowest proportions that performed below the national minimum standard in reading or numeracy. Compared with well-grown term infants, substantially higher proportions of children fell below the national minimum standard in the low birthweight, SGA and preterm groups (Table 2).

Figure 2.     Proportion of children with poor outcomes identified by low birthweight, preterm and SGA at term, and preterm and low-birthweight indicators (click to enlarge) 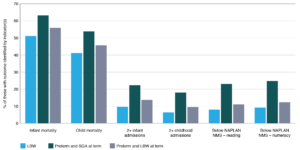 As well as having poor sensitivity for identifying SGA and preterm births, low birthweight is problematic as it can be affected by factors that decrease birthweight without increasing the risk of poorer health outcomes. For example, infants born to mothers who live at high altitudes are more likely to be low birthweight, but the birthweight-specific mortality for the high-altitude low-birthweight infants is lower than for low-birthweight infants born at lower altitudes.23 In contrast, preterm birth and IUGR are conditions consistently associated with poorer childhood outcomes, as well as being potentially modifiable, making them good candidate indicators for identifying groups at increased risk. Although some of the difference in proportions of adverse outcomes seen in this study may be due to confounding by factors such as maternal age and socioeconomic status, other studies have shown that most of the increased risk remains after adjusting for these factors.24,25 Adjustment for potential confounders was not appropriate in our study as we wanted to assess the usefulness of indicators at a population level.

Preterm birth can be captured at a population level by reporting the proportion of births that occur before 37 weeks gestation, provided accurate gestational age is determined and recorded. An indicator of IUGR in term births should also be reported. Accurate determination of IUGR for all infants is not feasible, but some measure of size at term would be an appropriate proxy. Mean birthweight at term, the proportion of infants that are low birthweight at term or the proportion of infants that are SGA at term are options. Mean birthweight at term has been suggested elsewhere as an indicator23, and is appealingly simple, however the associated level of risk cannot be calculated as easily as with low birthweight or SGA where infants are divided into ‘exposed’ and ‘unexposed’ groups.

Reporting the proportion of infants that are low birthweight at term as an indicator has the benefit of being simple to determine, but does not take into account the lower mean birthweight of female infants compared with males. Additionally, low-birthweight births at term are likely to be a small proportion of all births, so in smaller populations a difference of only a few births could have a large relative effect on the proportion, making comparisons between groups less precise.

The strengths of this study include the population-based design and the large study population, covering almost all births in NSW over more than 20 years. A limitation is that information was not available on all outcomes for every birth cohort included in the study. Additionally, NAPLAN results were only available from government schools.

Although low birthweight is widely used to identify infants at greater risk of adverse outcomes, we found that in this population, low birthweight only identified 28% of the infants at increased risk. Low birthweight is used as a proxy measure for two important predictors of infant and child health: preterm birth and intrauterine growth restriction, but we found that almost half of the preterm births and the majority of SGA infants were not low birthweight; hence the low birthweight indicator greatly underestimates the prevalence of these conditions. In populations where gestational age can be accurately determined and is routinely reported in birth records, an indicator of preterm births and an indicator of size at term will better identify vulnerable groups, and provide a better estimate of the magnitude of the issue. This, in turn, will allow for more meaningful comparison of populations, the monitoring of trends, and the evaluation of interventions to improve maternal health.

This work was completed while DH was employed as a trainee in the NSW Biostatistics Training Program funded by the NSW Ministry of Health. She undertook this work while based at the Kolling Institute.

We are grateful to Amina Khambalia for reviewing an earlier version of this manuscript.

© 2021 Hennessy et al. This work is licensed under a Creative Commons Attribution-NonCommercial-ShareAlike 4.0 International Licence, which allows others to redistribute, adapt and share this work non-commercially