The manuscript was written solely by DK based on her personal experience.

In this perspective paper, I describe the terror of being trapped in an isolated village on the New South Wales (NSW) South Coast as a catastrophic bushfire approached. In the aftermath of the 2019–20 ‘black summer’, I reflect on factors that could have helped reduce the trauma and stress experienced by residents, both during and in the wake of the bushfire event. Education, community planning and preparedness for a situation where modern communication methods fail are key factors to consider.

The public information was clear: “You need a fire plan”. Ours was to leave – leave early.

Like many in our village, we are tree changers who have moved to the Shoalhaven area on the New South Wales (NSW) South Coast from the cities and towns. We evacuated our small town of Fishermans Paradise on the shores of Lake Conjola once before in December, leaving for the safety of the nearby town of Ulladulla, early on a day when fire conditions were expected to be bad, registering at the evacuation centre and spending the night in a motel. We had made difficult decisions about what to take and what to leave behind. Our ‘go bags’ had been sitting by the back door for weeks.

Throughout December 2020, with a severe bushfire season predicted, I obsessed over the NSW Rural Fire Service (RFS) Fires Near Me1 app, which provides up-to-date information about bush and grass fires across NSW, as well as a radio scanner app which gave access to emergency services communications between the RFS control base and the firefighting units in the field.

On New Year’s Eve, my housemate Ricci and I knew that conditions would be catastrophic and planned to evacuate to the town of Ulladulla. By 8am it was oppressively hot and the scanner was busy with a clamour of reports. As I made sandwiches – only minutes from our planned departure – I heard terrifying messages relayed in calm voices. Fire had cut the main highway just south of our village. The phones pinged with messages from Fires Near Me: “Fishermans Paradise too late to leave. Shelter in place”.

In that moment there is such terror. We know these fires are fierce and fast enough to frighten the experts. Physically hampered by age and poor mobility, and without the training of sensible country girls, we were trapped by fire. I ran out and grabbed a hose, and worked with a tiny stream of water to wet down what I was sure would soon be engulfed by flames.

An RFS unit radioing from my street reported that fire was racing through the properties at the end of our road; the road was blocked by a burning tree. Our one access road out – there was no other way in or out of the village. And then the internet and phone went out.

Clouds of orange smoke rose behind the neighbour’s roof (Figure 1). Helicopters buzzed back and forth dropping water behind the village. I stood in the bathroom wetting towels. I was convinced the fire would overrun us. Where was the best place to shelter when it arrived? On the aluminium door frame I had written “Two humans, two dogs”. The mop-up crews, I thought, will know how many bodies to look for.

We poured water onto the house and waited. Many residents went to sit in the nearby creek but trees were burning along its shore and they were showered with burning embers.

Figure 1. Fishermans Paradise resident Ian Harp hoses down the roof of his home on New Year’s Eve 2020, as the fires approach (click to enlarge) 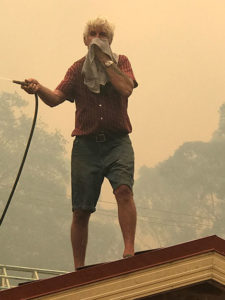 By the late afternoon, the immediate danger had passed. On the car radio we heard that Fishermans Paradise had been “wiped out”. We were so close to obliteration that even the fire brigades did not know that we – and our house – had survived. Fear about what our families and friends might think had happened to us added to our anxiety.

In oppressive heat, the whole house had to be opened up despite the smoke which was still rolling in from the smouldering surrounding bushland. That night not a bird or possum moved. We learned that our closest neighbours at Conjola Park, Lake Conjola and Yatte Yattah had been hit hard, losing more than 90 houses and three lives.

We didn’t yet know that our village of about 500 people and 150 homes had not lost a single house. Heroic efforts by the helicopters and groups of residents fighting spot fires on three fronts right on the village boundaries had stopped it.

How could better planning have eased our stress?

There is ample evidence that individuals exposed to disasters experience adverse mental health at a higher rate than the general population.2,3 Symptoms of distress, while generally improving over time as individuals adapt, can sometimes develop after considerable delay.4

The Black Dog Institute, in recommending strategies to assist disaster-affected communities in the immediate, intermediate and longer term, notes the importance of providing practical support; encouraging social connectedness; and community activism.5 A roadblock staffed by NSW Police and the RFS was in place at the main highway enabling access to Fishermans Paradise from day one after the fire. They kept us in and others out, but had little information. They were clearly not tasked to come into the village and make contact with residents. No officer from any of the other services such as health, welfare services, council and power providers arrived for almost a week.

Villagers implemented a doorknock on day three. They identified which houses were occupied, made arrangements to provide special assistance where possible and distributed aid when it began to arrive. Locals found this extremely comforting and many joined enthusiastically to help with the recovery centre established at a private home. Donations from individuals started on day five, with the arrival of a police-escorted truck containing basic supplies.

Staff from the Local Health District community mental health team were on hand from day seven, visiting regularly to offer on-site debriefing sessions to residents. Although debriefing in the immediate aftermath of a disaster is no longer recommended5, the response by the community was positive. Perhaps residents found it especially comforting because mental health workers were the only ‘official’ visitors seen in those first days.

Unfortunately, the lack of any prior organisation, a single agency coordinating aid and support, or a community centre meant that a few individuals in the community were heavily called upon. A strong positive sense of community developed, but the stress among residents was palpable and as a result, there were some disputes and ill-feeling. Conflicting messages resulted at times and some aid did not reach its mark.

At the time of writing, 9 months after the fires, many residents of Fishermans Paradise are still experiencing distress as a result of the fire. Anecdotally, people report depression and high sensitivity to triggers such as the first hot windy day of the spring. The majority of residents will prove resilient and experience less distress over time, however there are doubtless cases of significant depression and post-traumatic stress disorder in this community.

Recommended actions to reduce trauma before and after a bushfire event

There are actions which can work to reduce trauma, and therefore the likelihood of serious mental health problems in disaster victims. In the face of the possible collapse of our technical communications, it is necessary to develop capacity to utilise older methods of communication both during and after a bushfire event:

1. Attendance by RFS or State Emergency Service workers on the day of the fire to advise residents and assist those with mobility issues to evacuate

Clearly resources were stretched to the limit in this period and this fire flared up much earlier in the day than expected. In past events, door knocks were conducted by the RFS with evacuation orders issued and assistance provided where needed. Many older residents were waiting for this intervention.

2. A representative from authorities responding to the disaster visiting the village within the first 24 hours after the firefront passed

As the hours passed with no outside help, desolation and anger began to consume people. What was needed was reassurance and/or information on efforts to get roads open, power on and communications restored; someone collecting information about which residents were still in the village and their needs; and an opportunity to get messages to people outside.

Shoalhaven City Council has identified a very strong positive impact resulting from its innovation of including Environmental Health Officers within the Building Impact Assessment Teams that attended damaged properties in some other affected areas (with NSW Fire and Rescue and Police). They provided immediate contact, collected needs information and provided basic supplies.6 Isolated villages needed the same kind of support.

Local disaster management and recovery plans should include a community development process to put, and keep, in place a network of community support. The aim would be to provide a visible, community lead but officially supported (and badged) effort able to begin immediately after a disaster.

Education is needed to assist people to get up to speed on what should be considered in their Fire Safety Plan and to encourage conversations with neighbours about property preparation. Shoalhaven City Council has begun to implement a series of preparedness webinars to assist people in preparing for the 2021 fire season.7

© 2020 Killian. This work is licensed under a Creative Commons Attribution-NonCommercial-ShareAlike 4.0 International Licence, which allows others to redistribute, adapt and share this work non-commercially provided they attribute the work and any adapted version of it is distributed under the same Creative Commons licence terms.